We are tempted to say that Italy’s financial market situation is as bad as their current situation in football. Fears over the current upheaval in politics quickly spread to the rest of the world raising European concerns about longer term spill-overs with a stronger dollar and a lowering European growth.

With the increased nervousness resulting from the panic in the market and the lack of confidence in the Italian finances, some stay relatively positive as they claim that the situation cannot be compared to the level of financial distress registered in the 2011 European financial crisis.

So, is this a purely Italian issue or do we risk seeing consequences on the entire European Union?

The euro currency has fallen to its lowest value in a year right after the outcome of the Italian tumultuous elections and the win of the Eurosceptic parties. More recently, the European financial stocks also plummeted led down by the Italian banks after chaos ruled the local markets due to the worsened local political situation and the government’s plan unraveling. 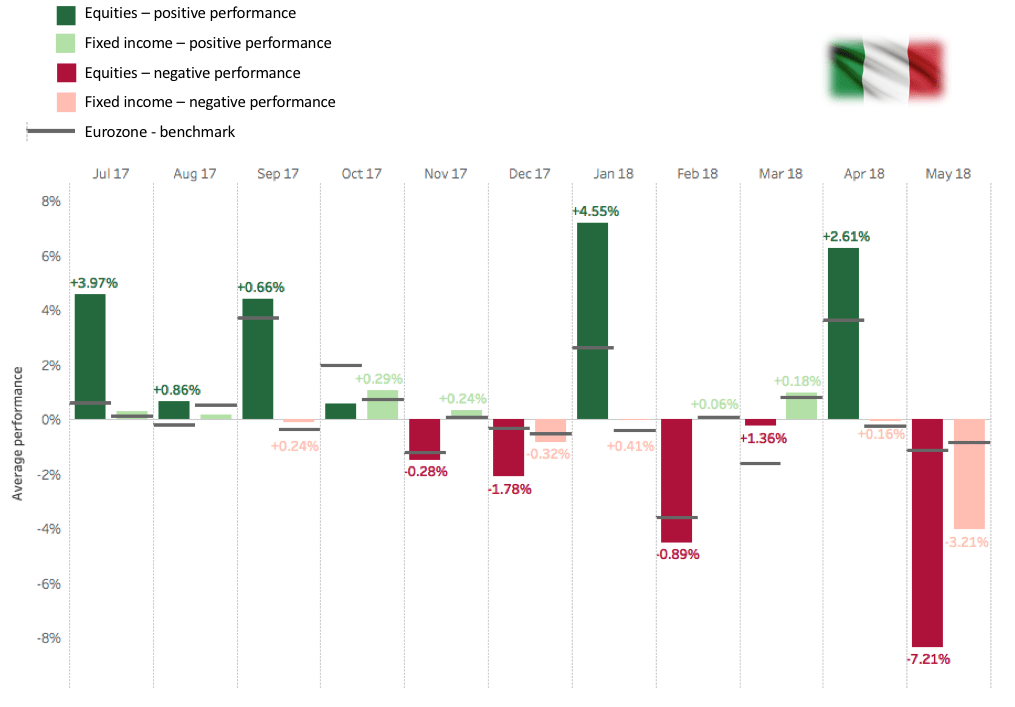 We analyzed a total of 285 beta strategies to compare “Italian equities and fixed income performances during the past year” to the “Eurozone benchmark”.  The percentage you see on the chart above is the difference between the two, +3.97% for instance is the percentage by which Italy outperformed the Eurozone benchmark.

We can clearly see the disparities of performances in the equities especially since the beginning of 2018. In January, Equities managed to perform positively in the market with a surplus of 4.55% but quickly moved to the negative area and performed lower than benchmark scoring -0.98%, same scenario happened during April and May.

Nevertheless, the small diminish of anti-establishment concerns helped the Italian market to strengthen a little. Indeed, the markets seems to be recovering and scored their best rise in over a year.

But will this be enough? Is it the sign of the commencement of a market recovery or is it the start of a domino effect bringing down the entire European Union?

One sure thing, the current situation is clearly unfavorable for Italy.

To get more statistics and analyses access our platform for quantitative investment.